Everyone likes to be beside the seaside – the problem is, during the summer the beaches can get a bit crowded. Here is a guide to some of Suffolk’s smaller resorts which you can visit during a relaxing stay in one of our holiday lodges with hot tubs at Windmill Lodges. 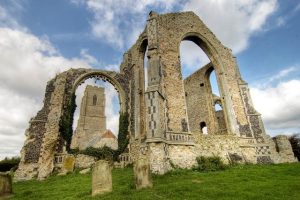 This village is just north of Southwold, and less than 25 miles from Windmill Lodges. It shouldn’t be as crowded as its more famous neighbour, because you can only reach the beach on foot or by bike.

Covehithe used to be a thriving town, but coastal erosion put paid to that by the 17th Century, and it now has a population of around 20 people. The sand cliffs are still eroding rapidly, at a rate of more than 4 metres a year. Its main feature, as well as an excellent sandy beach, are its two churches – the old St Andrew’s Church, which is now just a shell, and the more recent one, which was built alongside the original in 1672. 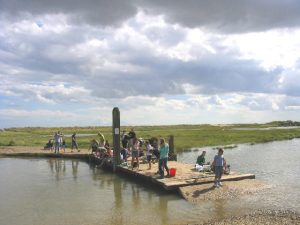 This village is just south of Southwold, on the estuary of the River Blyth. Like Covehithe, its parish church is also called St Andrew, and it also has plenty of unspoilt sand dunes and marshes which are ideal for walkers and bird-watchers. While the annual crabbing championship is no longer held here, you can still while away a pleasant afternoon catching the crustaceans on the pier – great fun for children.

Walberswick also boasts pubs, restaurants, gift shops and tea rooms and a population of around 380. Many leading names from the arts and media world have second homes here. 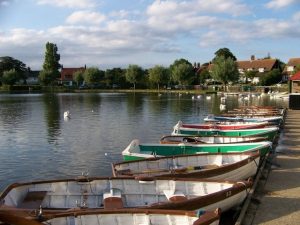 This was originally a small fishing hamlet, but in the early 20th century a Scottish barrister called Glencairn Stuart Ogilvie transformed it into a fantasy holiday village. It was rebuilt in mock-Tudor and Jacobean styles, and some descendants of the original builders and craftsmen still live in the homes today.

The original design included a tennis club, a golf course, a swimming pool and a library. An artificial lake, The Meare, is very popular with youngsters who want to try their hand at boating.

Other notable features include the famous ‘House in the Clouds’, a converted former water tower, and a set of distinctive almshouses. It also has a beach right on its doorstep – and it’s less than 20 miles east of Windmill Lodges. 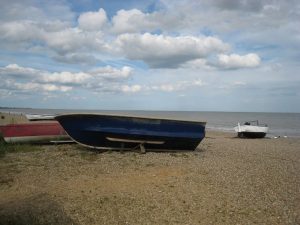 At the height of its importance, the village was an international port similar in size to medieval London. A series of storm surges in the late 13th century, followed by more gradual coastal erosion and the movement of the Dunwich River northwards – where it became the River Blyth – meant that the village lost its houses and trade. The full story is told in the Dunwich Museum, which is open throughout the summer season.

Alternatively, you could enjoy a pint of the local ale at The Ship, a cuppa at either of the two local tearooms, or a gentle stroll along the beach.

There’s plenty of wildlife to see in and around Dunwich, as the village is in the heart of the Suffolk Coast and Heaths Area of Outstanding Natural Beauty and close to the RSPB reserve at Minsmere.

At Windmill Lodges we have four- and five-star holiday lodges with hot tubs, so whichever resort or beach you choose to visit in Suffolk, Windmill Lodges is the ideal place to stay. After a day spent exploring some of the county’s hidden gems, what better place to unwind than in your own private hot tub?  Relax in luxury, and ease away the sand between your toes!

All our lodges also have a fully fitted kitchen and an en-suite shower room, TVs and free Wi-fi. If you would like to find out about the current availability of any of our authentic log cabins, simply click here and fill in the online form, or call us on 01728 685338.