With the release of The Dig on Netflix at the weekend, we sat down as a family to enjoy. What a fabulous portrayal of the story behind Sutton Hoo, when in 1939 one of the greatest archeaological finds was discovered. This find was an Anglo Saxon royal burial, inside the outline of a ship they found a burial chamber which held the most magnificent treasures, the most iconic of which is the Sutton Hoo helmet. 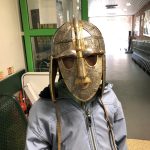 This is our youngest son Joseph modelling a replica of the Sutton Hoo helmet!

The Dig is a British drama film directed by Simon Stone, based on the 2007  novel  by John Preston of the same name.  The film stars  Ralph Fiennes as Basil Brown who in my opinion does an incredibly good job of the Suffolk accent. Also starring amongst others, are Carey Mulligan as Edith Pretty, Lily James as Peggy Piggott and Ken Stott as Charles Phillips

Although the film was not exclusively filmed in Suffolk, the county’s countryside does feature heavily. You can find out more about the filming locations here.

During your next stay with us take a visit to the National Trust Sutton Hoo, to see the burial mounds for yourselves and some of the treasures they discovered.

Five Advantages of a Short Break at Windmill Lodges
September 14, 2021