Historic Halls and Houses to Visit in Suffolk East Anglia is a region with a rich historic past, and it has plenty of fine stately homes and gardens. Many of them are within easy reach of Windmill Lodges – so why not combine your Suffolk hot tub holidays with a trip back in time?

This is one of the best-preserved Tudor buildings in the whole of Britain, and well worth stopping to admire if you are spending a day in Aldeburgh. It dates back to the 16th century, although some restoration work was carried out in both the 17th and 19th centuries. It has been put to many different uses over the years – from council chamber (Moot is a Saxon word for meeting), to a key part of Aldeburgh market, to a town prison. In 1646 six local women were held in the Hall’s cells after Matthew Hopkins, the Witchfinder General, had identified them as witches.

Nowadays the building, above, is home to Aldeburgh Museum, which tells the story of the town right back to Roman times. The museum has recently been closed for major regeneration work to be carried out, but this is expected to be completed in summer 2019. Although the museum is shut in the winter months, the hall is still in constant use then, as it houses the town clerk’s office.

This impressive hall, around eight miles from Saxtead, was also built in the 16th century and was originally the home of the de Glemham family. The current owner is Major Philip Hope-Cobbold, whose family were part owners of the Tolly Cobbold brewery.

Although the 3,000-acre estate is home to a working farm, its highly impressive garden is open to the public for special events such as theatrical productions, antique fairs and folk festivals, while the hall is also a licensed wedding venue. Guided tours of the house and garden are available on specific dates, and you will need to book in advance. 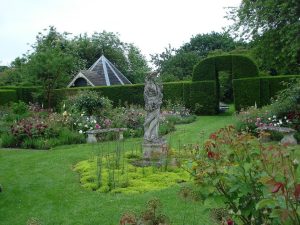 This is also around eight miles from Windmill Lodges, and it is originally built by, and is still owned by, the Tollemache family – the other half of the famous Suffolk brewing dynasty. The hall was built in the early 16th century and is surrounded by a moat which is home to many different species of fish. The two drawbridges are pulled up every night and lowered every morning.

While the house is not open to the public, its gardens (above) are, and they are well worth a visit. Redesigned by the current Lady Tollemache, a gold medallist at the Chelsea Flower Show, they include separate herb, knot, wild and rose gardens (above), herbaceous and summer borders, and a highly distinctive parterre and hybrid musk garden. The gardens are a licensed wedding venue, and host events ranging from plant fairs to concerts and classic car shows.

A little further afield – around 17 miles south of Windmill Lodges – is Christchurch Mansion, pictured above. Often referred to as the jewel in Ipswich’s historic crown, this Tudor mansion is in the grounds of Christchurch Park, close to the town centre. This Grade I listed building was built on the site of a 12th century Priory and has been a museum since 1895. Exhibits include paintings by John Constable and Thomas Gainsborough, plus collections of pottery and glass.

Some of the rooms have been preserved to reflect varying periods of history, from the Tudors through to the Victorians. Opening times vary, so you should check in advance, and guided tours are also available.

Whether you want a family holiday, a romantic getaway or just a short weekend break, Windmill Lodges is ideal. Our authentic log cabins, near Framlingham, are all been given either four or five stars by respected tourist organisation Visit England. They have fully-equipped kitchens and en-suite shower rooms, plus your own private hot tub to relax in. We also have an on-site swimming pool which is open from the Spring Bank Holiday (May 27) until October. Follow this link for more information about our Suffolk hot tub holidays.